100. The Dalai Lama with Advice for Clinicians

Home 100. The Dalai Lama with Advice for Clinicians

The Dalai Lama (@DalaiLama) recently visited Sydney and addressed an audience at Westmead hospital for a discussion loosely around medical bioethics.

Fitting for our 100th podcast, the Great man talks about organ donation, his own experiences with healthcare in recent years, the history of medicine in Tibet and has advice for us all about how to treat our patients. The audio isn’t perfect, so a transcript is available here too.

This is a classic!

His Holiness is a truly inspirational man. Humble, warm, charming and with a sense of humour that dissipates the formal sense of occasion that his presence naturally brings.

He is instantly likeable. But it is his wisdom that sets him apart from all others. This has been tempered not only by a profound understanding of the Buddhist philosophy, but also his experience of negotiating the survival of his culture and people and overcoming tremendous adversity.

At this forum he gave general advice to healthcare professionals and gave his views on some pertinent bioethical conundrums.

In this first section, he talks about organ donation, which you may be surprised to hear his is an advocate of, and many of his friends have been involved as recipients. He then describes his experience on the receiving end of healthcare when he had what sounded like a nasty cholecystitis requiring a cystectomy.

He gave a candid account of this experience, including how he achieved “death-state” (a profound level of consciousness reached by experts in meditation) through medication rather than meditation (cue his infectious gafoor) and more serious advice to us in general about our approach to patients. The physician who clearly empathises with his patient will show this by the care and compassion they demonstrate in their bedside manner. He believes this to be more important than the words or actions that follow. And the cold, uncompassionate practitioner makes His Holiness fear for his life and wonders what experiments are to be conducted on him!

(Disclaimer: this has no reference to clinical trials that have attained appropriate site specific ethics approval)

Indeed, I am very happy, therefore, to come to this.

Alright, firstly did you mention … organ transplant. Of course when we first heard about something (organs) comes from either dead or living body; comes from transfer to another body– this is “different” (laughs).

But then, on a number of occasions, many of my friends actually needed a transplant, an organ transplant. So many, many cases successful, except because of the locations of some of them… Opportunities have been otherwise successful.

So patients who think their condition is hopeless (organ transplant) give new life. Wonderful, very wonderful.  Some I admire. Although in my own case it was not for a transplant but for my gall bladder. I think that since that since perhaps in my early 70s, you see, there, some stones in (my) gall bladder start(ed).

Then there were some doctors, some physicians, who carried a medical check up with me, so some suggested treatment…but then I was reluctant…. Some part in my own body to be removed! It was difficult to understand. And then the things got worse and worse and worse until abut 4, 4 or 5 years ago; and then finally (it was) removed. Magic , magic person.

So I remained (in), as we Buddhists call “a very subtle level of consciousness” and so through medication, I experienced at least two hours of “death-state of mind” (Laugh); not through meditation, but through medication!. (laughter). So then actually, anaesthetic and surgery, the concerned people say (it takes) only 15-20 minutes. In my case, was that the organ has had too much stone and was filled up with pus- so enlarged, almost double… so it took over two hours, nearly 3 hours.

At the beginning, you see, there was some  saying a virus or you know, my ankle goes like that (laughs) I think there’s four days like that, quiet , and you might sleep; I always used to say some sort of concerning like that, if … come out over there and just went… (laughs) and then in 5 days, remove and everything would be OK.

So I really develop deep admiration for modern surgical expertise; and also physicians.

So I hear you are carrying out these sort of further research – wonderful, and also on different disease/illness – really wonderful. You truly devote great service to humanity.

Then, in Tibet, you see…of course, we have our own medical traditions – I think for over two thousand years. And then (in the) 8th century a “semi-international” medical conference took place in Tibet, under the auspices of the Tibetan emperor emperor of the 8th century. The Chinese doctors, physicians,  and the local doctors, physicians,  and then Indian physicians – (Ayurvedic tradition) then also, I think the Unani….(a tradition of Graeco-Arabic medicine brought to Tibet from North India).

So since then, Tibetan medical system is something like a more synthesised medical system. Our methods of history say that in the 8th century there was some surgery that took place! Then of course, not like modern machine, modern instrument, then they had a big knife or something like that! (laughs)

So, as they researched, the patient died, so since then, the olden days, theoretically the Tibetans had a system that mentions surgery, even surgery for brain, and these things mentioned, but this has been discontinued in practice because of that incident.

So anyway, quite (a) rich (history of medicine in Tibet); so now usually Tibetans (are) saying such-and-such  doctor, or one whose skill and knowledge (is good), but that doctor heart not very kind, so his medicine (will have) not much effect. But (another) such-and-such doctor, his skill not necessarily high but very warm-hearted person, so they feel their medicine is usually more effective.

So I think on the same way, I think my own sort of case, when I carry some sort of medical treatment, my team or certain people think, that when the doctor, the specialist, show a smile and show serious concern, then I feel safe.

Then some doctors, without a smile, treat me, treat you like (a) machine.

Then sometimes (it raises) the suspicion “Ohh that doctor might carry out some experiment on me!” (laughter)

So therefore, the doctor say “Patient; no one comes as a holiday but difficult situation – illness. Hope (you will come) to the hospital”

So, doctors must show serious concern about their (patients’) well being – not only their expertise,  but (must) show human affection.

That, whenever I have the opportunity of meeting with doctors, that I always will mention.

My own case, the doctors, very.. take care of me, so recover within a week – doctors very surprised, said very speedy recovery.

So that leads to a very important matter. That, basically, according to many scientists, medical scientists, now they say “healthy mind is a key factor for healthy body”.

So doctors, physicians, I hope, and I think you are (already) doing, paying more attention to providing sincere care and compassionate care.

So, that’s all … now questions! (laughter) 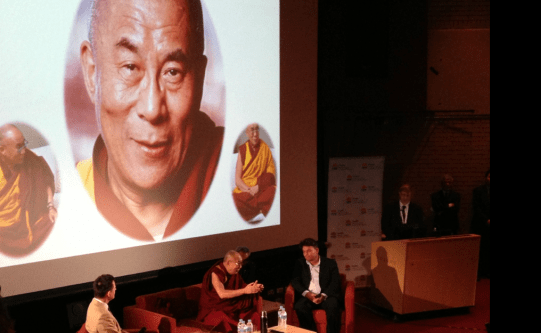