Held at the Shangri-La in Cairns September 23nd to 27th, this week was more than just a normal conference.

These guys know how to work and play hard. It was five days of fun, fluro, fish watching and fraternizing as well as a fantastic educational program.

Read more for the final rundown….

Day one (Registrars Day) was jam-packed with the big names of critical care each sharing their expertise on clinically relevant topics. Oli Flower’s slides and talk about Brain Death were truly impressive. Fran Lockie’s closing statement from his talk on pediatric intensive care medicine encouraged us that although children are not little adults, it is better to treat them as such than as ‘gherkins’!! In the afternoon a mass-trauma simulation (Run by the truly amazing John Gatward and John Vassiliadis known as J1 and J2) called us to Cairns Base Hospital where we battled against fainting nurses, minimal equipment availability and asystole in an organo-phosphate emergency. A very big thank you to CBH and the Sim team there for all their time and effort.

At the end of a first big day, we were given an opportunity to mingle and meet with other delegates. Initially a blind wine tasting competition was held to test our sommelier skills and pit state against state. This saw the NSW team come out strongly only to be run down by a combined barbarian team from WA and the rest of the world (NZ/ UK/ Japan/Netherlands).  As if this wasn’t enough to get tongues wagging, the drinks and socializing continued into the night at the welcome reception.

The sun rising on day two promised for a fantastic day and no one was disappointed. Once again we were spoilt by the clever minds and witty talks of specialists covering topics from Celia Bradford’s discussion about vasospasm to the fantastic Anaesthesia update session led by Sean McManus. J2 made sure we all remain ever vigilant about always expecting the unexpected when approaching airway management.

Day three was busy, big and busting to the seams with workshops galore. Georgie Harris schooled us all on airway anatomy with homemade anatomy models that the great Henry Gray (1827-64) himself would be jealous of. We were given opportunity to practice important procedural skills which included but were not limited to surgical airway, awake fibre-optic intubation, CMAC-guided intubation and tracheostomy. The ultrasound tutorial was initially shades of grey but as the session progressed the black and white definition became clearer.That night, after a well-rested afternoon, the likes of fluro, glow-sticks, 80’s music (the spectacular Captain Wow band – A BCC standard!), dancing and costume dress came out to play at the gala dinner. A newfound awe was found for many intelligent individuals as they hit the dance-floor and karaoke machine.

Day four was appropriately an afternoon session. The initial set of lectures after lunch covered liver disease presented by the RPA team, which had a few people holding their RUQ, with slight regret from the previous night. Dr Wesley covered a much-debated topic of anticoagulation, providing correct guidelines to follow.
Day five was bittersweet, as we knew it was all coming to an end, however the program for the day was as innovative as the rest. Dr Plunkett made jaws drop with his demonstration of thoracotomies. Dr Roger Harris’ mastermind proved itself in both his master class on nutrition and his models used for peri-mortem C-section. 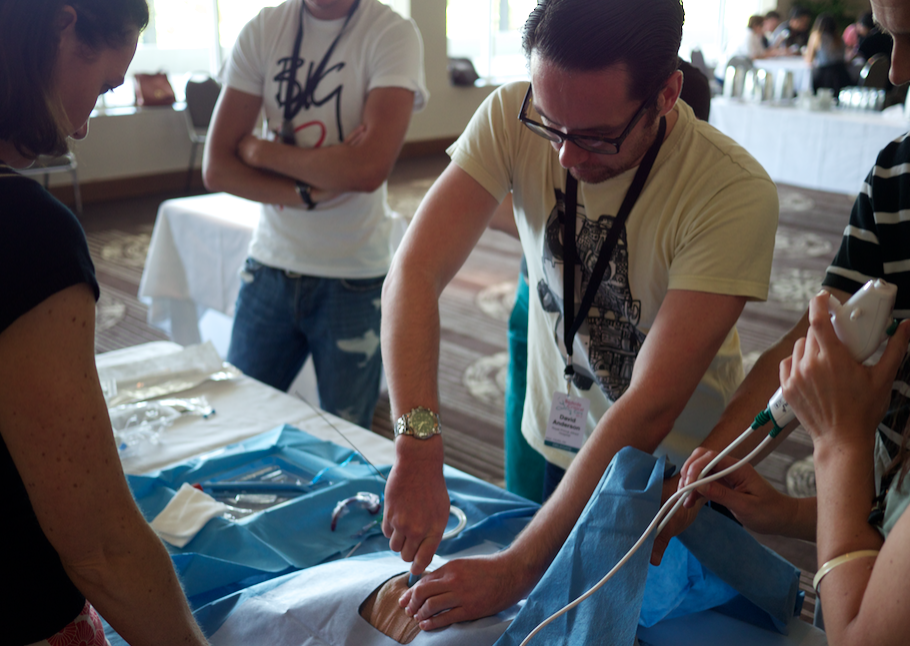 The above summary is really only a small selection of highlights from what was an unforgettable and motivating week. It was hard not to come away being excited by the future of critical care medicine and the fabulous people who are a part of it. If you have not yet enrolled for the SMACCGold conference in March 18-21 2014, I strongly suggest you get onto it quick smart ( www.smacc.net.au )

The ICN crew in Cairns

Go to the ICN Facebook page for more pics!

BCC Faculty in order of Appearance