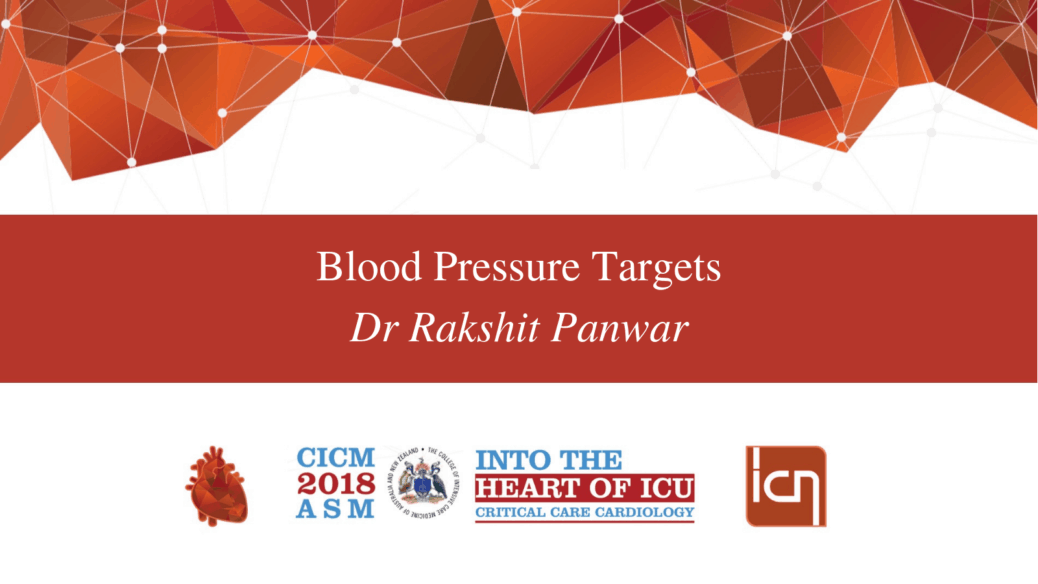 Blood Pressure (BP) is one of the vital hemodynamic parameters that we often aim to optimize for critically ill patients. Our decisions regarding BP targets, and ensuing use (or avoidance) of vasopressor agents, may directly impact on outcomes for these patients. Despite being a fundamental tenet of critical care, there is a lack of quality evidence to suggest optimal BP targets or to guide the use of vasopressors for individual patients with shock. A mean arterial BP (MAP) of 65-70 mmHg is an often-cited initial BP target for patients during vasopressor therapy. Use of vasopressors to maintain MAP of 65 mmHg or greater remains one of the core clinical criteria in the new definition of septic shock. However, such standard targets are unlikely to be applicable to all patients, many of whom would have a basal MAP higher than 65-70 mmHg, often to a varying degree, during their usual pre-illness state. Therefore, a vasopressor therapy guided by standard BP thresholds may result in a variable degree of untreated relative hypotension, which is associated with new-onset acute kidney injury (AKI). From a physiological standpoint, any relative reduction in net perfusion pressure across an organ’s vasculature can overwhelm its autoregulatory mechanisms, which are already under stress during a shock state. In a recent major RCT, among patients with chronic hypertension, targeting a higher MAP of 80-85 mmHg, versus 65-70 mmHg, showed a lower incidence of subsequent AKI, but with no difference in mortality. However, this RCT did not take patients’ pre-illness basal BP into account, making it difficult to extrapolate these results to those patients with chronic hypertension, who usually have a well-controlled basal BP, or to those patients, who although have a higher-than-normal basal BP but are not formally diagnosed with hypertension. Accounting for a patient’s pre-illness basal BP can minimize variation in the degree of untreated relative hypotension that is often inadvertently accepted in conventional care. It is a simple, but untested, strategy. Further, new tools that can monitor cerebral autoregulation in real-time are on the horizon and have shown some promise in suggesting an optimal BP for individual patients with shock. This technology can further help adjust the initial BP target as a patient deteriorates or recovers from the shock state.