Since the introduction of portable ultrasound, focused or point of care ultrasound (POCUS) has achieved widespread acceptance in the critical care environment. It has revolutionised the bedside management of a number of conditions, particularly with regard to the assessment of shock, breathlessness & fluid status.

This manual & the course provide an introduction to the field. They are designed for the critical care sonologist who has already achieved proficiency in basic focused US (e.g. basic physics and image acquisition, EFAST, AAA and basic procedural guidance).

This course offers a mixture of lectures and practical skills sessions.

The key educational objectives are:

To provide an opportunity to demonstrate the following US skills in the critically ill patient:

This course is accredited for the following modules:

• Echocardiography in Life Support (CCPU, Australasian Society for Ultrasound in Medicine, in development)

• Lung (CCPU, Australasian Society for Ultrasound in Medicine) (in development)

What is critical care ultrasound?

A rapid, patient-focused bedside US scan. This point is critical: unlike traditional formal US (and even many ED applications such as foreign body localisation), CCUS does not focus on a specific organ or region. Instead, it addresses physiological questions, namely:

For this reason, the critical care sonologist may scan regions as diverse as the lungs, the heart and the limb veins (for venous thromboembolism) or simply the inferior vena cava and abdomen (for clinical suspicion of septic shock and cholecystitis).

CCUS should usually begin by scanning one or more of the lungs / heart / IVC in the first instance, and include other body regions as appropriate.

Another important point is that the initial CCUS is a rapid screening test. It is designed to be performed within a few minutes at most, and to assist resuscitation and stabilisation. This is because ‘ultrasound findings in the critically ill are caricatural’ [D Lichtenstein]. We are not looking for subtle pathology. For example, the CCUS will often miss a small pneumothorax but it will always pick up a large one.

Once the patient is stabilised, the CCUS gives way to the more thorough, more prolonged scans such as transthoracic echocardiography or formal lung ultrasound.

Limitations of critical care US screen

2. Algorithm only validated in critically unwell patients, not in those with minor degrees of illness (e.g. mild CCF)

The seven golden rules of critical care US

2. Clinical context is paramount. Make a differential diagnosis list before you switch on the machine. All data must be considered (e.g. FBC with Hb = 4).

3. Only ask questions that you can answer. Leave the fancy stuff (e.g. valve disease) to others.

Respiratory physician: “Would you really thrombolyse a critically ill patient with suspected PE on the basis of bedside US?”ED physician answer: “I spent years doing just that without the benefit of US. Anything that improves my accuracy must be good.”

A CONVERSATION WITH JB

7. A fool with a stethoscope will be a fool with an ultrasound. (Thanks to my co-author Dr Russell McLaughlin for this gem)

Image optimisation for critical care US

NOTE: this section assumes that you are already familiar with the basic principles of ultrasound physics and instrumentation, including common artefacts.

This section covers the following topics:

How to improve your images in CCUS

2. Which probe, which preset?

Probe: Are you in a hurry? Or performing a screening scan such as EFAST/CCUS? The curved probe and sector (cardiac) probes are probably as good as each other. Every clinician sonologist has his/her preferences (mine is the curved probe on the abdominal preset) but there’s no strong evidence either way. It’s worth noting that the father of lung US, Daniel Lichtenstein, advises that a microconvex probe is best so try it if you have one.

DON’T use the linear array probe if you can help it. It won’t show anatomical relations (e.g. you might place the probe on the liver and think it’s consolidated lung). Are you looking for artifacts (sliding and B-lines)? Once again, avoid the linear probe. Its ability to image structures in fine detail means it tends to obliterate artifacts! This is particularly true for B lines. By contrast, the very curvature of the images when the curved /sector probes are used tend to bring out the B lines, making them more obvious.

Are you looking for very fine detail e.g. pleural thickening, small areas of consolidation or tiny pneumothorax? Finally a role for the linear array probe! It is uniquely suited to imaging very superficial structures (in this case the pleural surface and subpleural pathology). The curved probe is not bad here either.

Avoid the sector probe for fine imaging at the lung surface. Although it fits between ribs & gets around the back, its poor spatial resolution and poor near field detail make it the worst choice here.

Pre-set: Some machines come equipped with lung presets, although you can ‘do it yourself’ by:

2. Turning off the fancy filters: THI (tissue harmonic imaging) and compounding/ multibeam (MB): because they make the artifacts harder to see.

Probe: Curved probe is best for image quality and anatomy; sector probe is OK if already switched on (e.g. for TTE) … and is probably better for imaging between the ribs (e.g. for imaging the IVC from the right upper quadrant)

Probe: Either curved or sector probe is adequate (subcostal window is best if using the curved probe)

Probe: Sector probe: its small footprint allows it to fit between the ribs

Nothing beats a vertically oriented probe. You can image the ribs (your landmarks) and quickly find the pleural surface. Some prefer to scan parallel to the ribs to expose more lung, and there are no hard and fast rules. But think about it: if you are scanning parallel to the ribs, and you see an echogenic line without any sliding, is it a PTX … or is it just the rib?

This depends on the window. It’s tricky, so more on this later.

Like all blood vessels, its diameters and change with respiration are best viewed and measured in the transverse plane in B mode. That doesn’t stop people recommending the longitudinal plane in M mode, and it looks sexy, but it’s too open to observer error.

5. Three tricks to increase your frame rate in cardiac imaging

These will make your images of fast moving stuff (e.g. the valves) much crisper 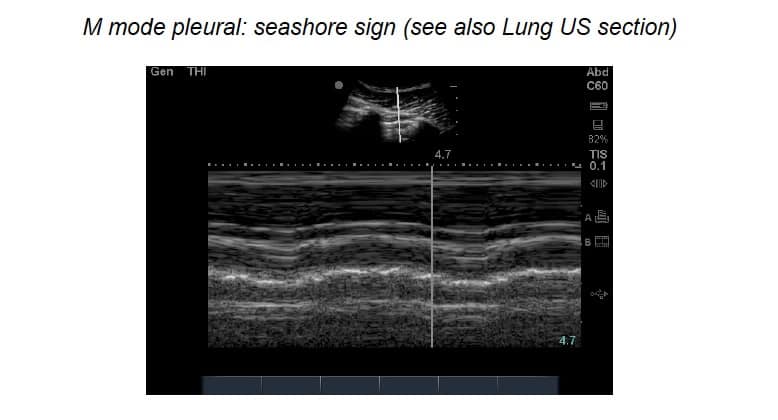 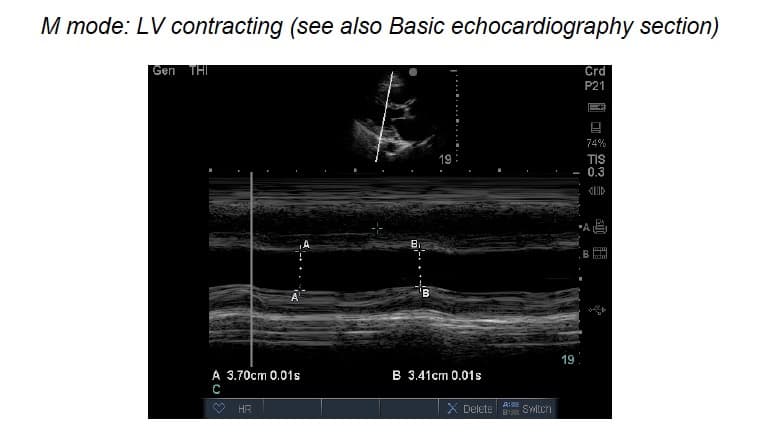 The machine sends ‘packets’ of sound waves & waits for each packet to return before sending the next packet. Less sensitive, but locates the site of the signal. PW has 3 variations:

Remember the BART convention (Blue Away, Red Towards) 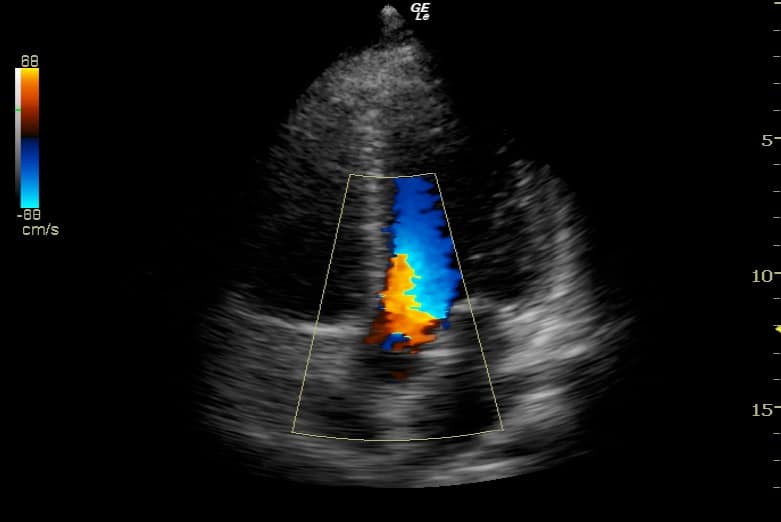 In this course, we leave Doppler alone! It doesn’t add much to a resuscitation scan and has the potential to mislead. Save it for the formal TTE courses!