What does FOAM mean to you?
This was the question posed to entrants of the smaccFREE competition. This competition was made possible through an anonymous benefactor who donated a ticket to smaccDUB in the spirit of Free and Open Access Medical Education. We are pleased to be able to showcase the winning response and finalist entries from the competition. We feel you’ll agree with us that the FOAM community is definitely a creative and passionate one.

FIRST PLACE is awarded to Adam Cahill, a first year Medical Student from the Royal College of Surgeons, Ireland, for his short essay entry…

As I sit here in Med School and flick through the reams and reams of notes and books, attempting to catch up on bits of the anatomy that I failed to see during my cadaver dissections this morning, I start to wonder what will Medical Education look like in 10, 20, 50 years time. While the widespread use of 3D cadavers is likely to sweep through Med Schools in the next few years (if not already prolific in some areas), I believe there is something practical and unreplaceable about phyiscal real-life cadaver disections that computers will find hard to replicate.

Nevertheless I do think that there will be a revolution in how Medicine is thought, and how information both new and old is discussed, debated and disseminated. I can see the initial changes quite easily as I flick from the old library books, with patches of notes scrawled on their pages by past students, to my MacBook Air, with its speedy access to the internet, all its information and misinformation, and its massive potential.

But where to start? Digitised copies of publications from the 19th century…Wikipedia… individual researches publications on the pages of their research centres… the options are endless; and that is one of the issues, there are almost too many options; almost. Now some might say that there is little that we still have to learn about our own physical anatomy, but I am reminded that it was only several months ago that I read about new research which highlighted a lymphatic draining system within the brain, something that prior to that was not thought to exist. Who knows how much more we can still learn. However I am also reminded that it was not in a lecture or tutorial that I learnt of this new development, but more so from
one of the apps running on my MacBook, TweetDeck, a livestream of my Twitter feed. And it is Twitter where I get most of my #FOAMed info and leads.

Do I think that Twitter will replace Med School? Absolutely not. But could its style of widespread, speedy sharing of knowledge and breakthroughs be integrated? Absolutely. So I believe it fitting that ultimately what #FOAMed means to be should be Tweetable, as such.

“What does #FOAMed mean to me?”: Fixing Outdated Archaisms, Molding Effective Dissemination.

Finalist Andrew Merelman explained what made FOAM special to him using an infographic. 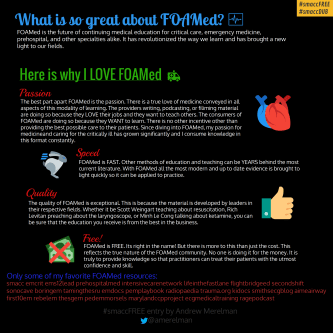 A FOAMed love story from badEM on Vimeo.

Finalist Bruno Tomazi got creative with words and composed a poem to celebrate FOAM!

FOAM
Once
the sparkles of knowledge
were trapped
in shining minds
not for greed
or otherwise,
neglect

be my complice
borderles
hence, togheter
we shall light
worldwide
the blaze
you once lit

SPECIAL MENTION should be given to Isabel Murcia who showed us what FOAM meant to her through a video in Spanish “because the FOAM movement is for Spanish people too”.


Last but not least, we would like to feature an entry from Patrick Bafuma, who despite knowing he didn’t qualify (as he was no longer a trainee), felt so passionately about the topic that he wrote in to share his thoughts with our community:

What does FOAM mean to me…

This is a difficult thing for me to explain for those not in the FOAM world. Hell, its difficult for some of my colleagues to understand. I wish I could whittle this down to a TED version, unfortunately, I know this will be long winded and a bit rambled.

FOAM has helped me with not just resuscitation and everyday EM, but it has made me a more compassionate provider – and has encouraged me to push the envelope to move my institution forward. As for the resuscitation and every day EM, I think I’m preaching to the choir here. I remember 4 years ago, the case that cemented me as a FOAM convert was when the poison review blogged about fentanyl laced heroin requiring 6-12 mg of naloxone for reversal, and then having a patient needing 10mg three weeks later. After that, I tweeted more, read papers at a frequency significantly higher than ever before, rabidly consumed podcasts, expanded my toolbox and attempted to apply my new found knowledge. FOAM encouraged me to read my own literature, draw my own conclusions, and even get to blog post on BoringEM. Imagine that… Twitter, home of Kanye, Kardashians, Donald Trump, and Jeremy Hunt, got me to read more primary research articles.

The tweet number needed to treat for resuscitation may be high – and for the average community EM provider the saddle embolism or pericardial effusion that is diagnosed on bedside US exam and not on autopsy is somewhat rare. However, once I began looking for every day EM material, I found that the tweet number needed to treat was actually quite low.

I began to truly feel that I should no longer say, “there is nothing more we can do” when I really meant, “there is nothing more that I know how to do.” Thus, I began to attempt nerve blocks for femur fractures. I began doing two troponin rule outs rather than admitting everyone. I recall having a patient with a rare form of constant headaches – hemicrania continua, and I attempted my first paracervical block on him after remembering Larry Melick tweeting about it. This patient had failed colchicine, anti-epileptic infusions, fiorocet, compazine / reglan, botox injections and at one point was told it was TMJ and tried to have decompressive surgery. Opiates, by his own admission, never really worked. After I performed a paracervical block, he came back every few weeks looking for me. It was the only thing that ever gave him relief despite years of other failed therapies. This story is not just about one person – its about FOAM giving me the expanded toolbox to help these “chronic patients” – and to look for better ways to treat them rather then by a security escort.

When I first started working in the ED, before FOAM, I initially had a “GTFO” or “#NoLortabsForYou” mentality. Once I expanded my pain and palliative care toolbox, I was surprised to see that quite a bit of my dental pain patients said thank you after I began doing dental blocks, and did not actually (always) come for narcotics!

In my quest for knowledge, FOAM encouraged me to start my own blog and continue to seek enlightenment – or at least put my own imperfect interpretation of imperfect literature in writing. Through my travels, I learned that IV and oral antibiotics for many disease states had comparable outcomes and began a shared decision making approach with patients for common things like cellulitis and pyelonephritis. Likewise for the CT/LP dogma for headaches. I always felt it a bit rude and coercive to just say, “there is you can die from this” rather than provide a well informed, “you have a one in several hundred chance that you have a bleed in your brain that may be uncovered by an LP, which may be deadly. but 20% of the time you have a worse headache than when you came in.”

With all of this, I was better able to sleep at night. I felt good about my job.Occasionally, I would get frustrated, and FOAM helped me with this. FOAM gave me multiple pointers – sit down, empathize, acknowledge and address their concerns – I slowly improved, and became happier and had the life sucked out of me less often. Then, I listened to David Newman on the SMACC podcast talk about word choices. Since this lecture came out, literally, every single ED shift I’ve had has been pleasant (or perhaps I’m skimming the ketamine).

Meanwhile, in October 2014, I had landed at my current position, where I have been inspired to push
an institution that practices medicine in 2016 like cutting edge medicine from the 80s. However, FOAM had encouraged me to push boundaries, so I got on the pharmacy and therapeutics committee to try to make a difference (or I was volun-told I “would be a good fit” by my department head)… Thus, we now have TXA in our pyxis and a protocol for giving it in trauma; we instituted intranasal medications like midazolam that allow for rapid sedation/anxiolysis for a child that may require a head CT or other procedure (rather than IV sedation which requires a lot more paperwork). In the setting of pediatric trauma, IN fentanyl is much appreciated by all involved, including the parents, while IV access is attempted (if necessary). I’ve scheduled an EGLS class for May 2016 for our group after listening to the EGLS folks on an EMCrit podcast, and have written hospital policy for peripheral vasopressors for our hospital after being inspired by a resuscitation conference podcast. This would not have been possible without FOAM. I have emailed multiple persons from the FOAMosphere asking for help for protocols, with help talking to management, etc. FOAMers have been overwhelmingly supportive and eager to help. I can count on a FOAM family member I have never met before to respond to an email within a few hours.

I moonlight in a remote 5 bed ED, and much like @KangarooBeach, I can attest that at times, I can feel very alone. Especially considering that the closest facility is 2 hours away, with transport occasionally being up to 6 hours away at times. At some of my darkest moments, FOAM has saved me by giving me courage and the knowledge to do the job at hand. At 2 am, awoken from a dead sleep with the dreaded, “we need you,” an anaphylaxis was staved off by the powers of FOAM (plus a dirty epi drip followed by an awake intubation with ketamine.). I’ve reached out to FOAM for a simple “you’ve got this” when good friends and my wife didnt pick up the phone at 4 am. I could never have taken this moonlighting position without you all – with FOAM, I’m never alone.

Somewhere on the blogosphere, I had heard that the great ones do not teach, they inspire. You have inspired me to be a better clinician and human being in ways I never previously thought possible. You
have given both me and my patients hope in our darkest hours. Since FOAM has come into my life, I truly have been able to cure sometimes, treat often, and comfort always.
Thank you for always being there for me. I hope one day, I can return the favor.
You all have been wonderful. Keep fighting the good fight.
FOAM on.