A 49yo man aspirates at the end of an otherwise uneventful cystoscopy. He develops a chemical pneumonitis & is transferred to ICU. Over the next 24hrs his condition deteriorates rapidly. He is intubated due to severe hypoxia, & has high ventilatory requirements. Despite optimal management, he has refractory hypoxaemia.

This is his CXR. 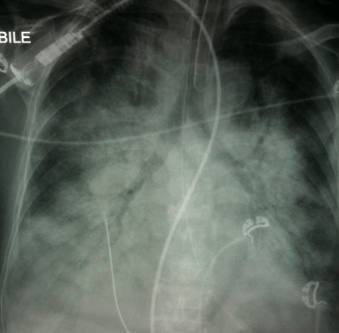 What is the likely diagnosis?

What are the CXR findings?

How would you manage this patient?

This patient has acute respiratory distress syndrome, or ARDS.

CXR: There is widespread air-space consolidation, & air-bronchograms. In this clinical context this is most likely to represent ARDS due to aspiration.

The patient has refractory hypoxia despite optimal ventilation…it’s time to bring out the rescue strategies. In this particular case, the patient was started on VV-ECMO.

Here is his CT scan.

Here is his CT scan. Again there is dense consolidation & almost no aerated lung. Note there has been R IJ cannulation for VV-ECMO.

The patient remains stable for a fortnight, then gradually seems to be improving. He is tracheostomised, CXR beginning to clear, & lung compliance improving. There is talk of weaning off VV-ECMO. Suddenly he becomes more hypoxic again with poor ventilation.

This CT shows a moderate sized R pneumothorax. There is less consolidation. There is evolving ground glass changes in the lungs, & some apical honeycombing. There are small bilateral pleural effusions. The R IJ ECMO line remains in situ.

The 2013 Berlin definition of ARDS & more, courtesy of LITFL

The Life in the Fast Lane (LITFL) team have a punchy ARDS summary complete with risk factors for developing ARDS, pathophysiology, & management strategies.

The Radiopaedia ARDS page provides clinical examples of ARDS, as well as describing the imaging findings.

How do you manage ARDS?

LITFL tackles the management of refractory hypoxia in a stepwise manner from simple strategies such as chest physio & optimising fluid balance, through to prone positioning & ECMO. Their page on recruitment in ARDS explains step-by-step recruitment manoeuvres & their pitfalls. Then they take on the ventilator & proning.

The team at Deranged Physiology take on how to use the ventilator in ARDS, including initial settings, choosing PEEP, recruitment manoeuvres, & more references than you knew existed.

A Scott Weingart (aka. EmCrit) podcast on proning, with a link to Resus Review’s checklist for prone positioning. These are important to know, since many units are unfamiliar with prone positioning – learn how to now!

Rob MacSweeney’s evidence based update on ARDS from SMACCgold 2014, includes both the podcast & his presentation slides.

The Bottom Line is a must know web site that collates landmark literature relevant to the care of critically ill patients. Here is the link for articles about ARDS. Yes, that’s right, they summarise the game-changing articles for you.

LITFL summary of ARDS literature presented topic-by-topic. Where’s the evidence for proning? Protective lung ventilation? It’s all there, with helpful commentaries on each study.