Sepsis is not a disease

Home Sepsis is not a disease

So the ED crowd have stolen a march on us following the recent publication of the Sepsis 3.0 Consensus Definitions. And fair play to them for doing so; it has really helped to get the details out in the open.

However, as the Third International Consensus Definitions for Sepsis and Septic Shock was made up of a panel of 19 intensive care physicians (more about this a bit later), it’s only fair that we should take a crack at them too.

Since 1991 we have been defining sepsis using SIRS-based criteria:

However, all along there has been an air of disquiet about this SIRS-based model of sepsis. Here are some of the key concerns:

Here are the new definitions as per the Sepsis 3 Consensus update:

“Septic shock is present when there is sepsis with a persistent hypotension requiring vasopressur supprt to maintain a MAP > 65mmHg AND a serum lactate > 2mmol/L DESPITE adequate volume resuscitation.”

As much as possible the committee tried to construct these definitions using available evidence. You can read more about this in the accompanying JAMA articles here:

The new definitions come with some specific criteria.

Sepsis requires a known or suspected infection (easy enough and arguably fairly subjective) with organ dysfunction and an element of life threat. This is where they introduce the use of the SOFA and qSOFA scores. 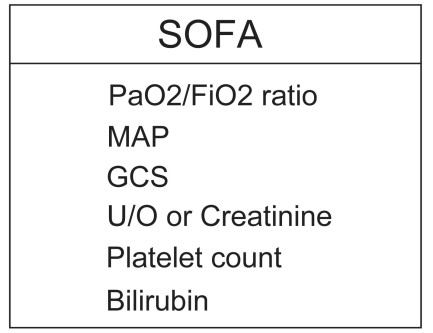 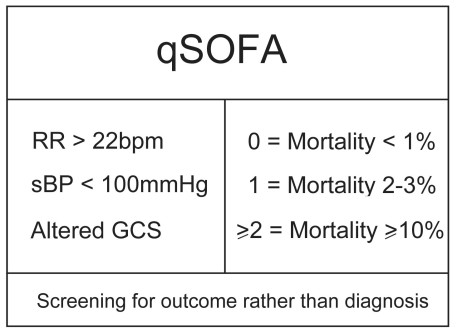 The components of these two scores suggest organ dysfunction and their absolute values indicate the degree of mortality risk.

Here’s how it works.

“I think this patient has an infection. He looks a bit sick, I wonder does he have sepsis, hmm.”

“Well he is tachypnoeic to 28bpm and he’s a bit confused so already his mortality risk in this setting is at lesat 10%.”

“Jeepers, he’s septic. This might kill him. I’d better get cracking, figure out the source, get cultures off and antibiotics in and I think I might give ICU a call.”

So the label “SEPSIS” is not an illness as such. It is a subset risk group of infected patients.

And if this patient is subsequently found to be hypotensive and needing a vasopressor, with a lactate >2mmol/L despite adequate volume resuscitation, then he is in the higher risk group of SEPTIC SHOCK. 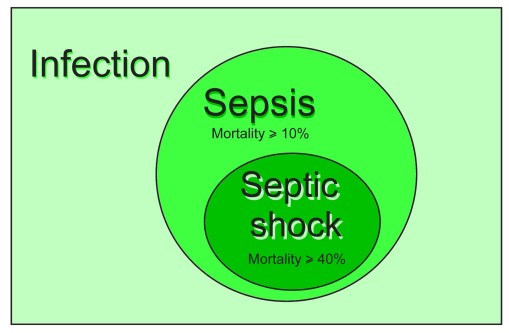 And how do I decide whether to use the SOFA score or the qSOFA score? Well I could use either. Realistically, as the SOFA score requires lab results, it can only be calculated once work-up has been started in the ED or is being followed up on the ward or ICU.

The qSOFA only requires three clinical criteria and therefore can be applied by the bedside on the ward, at ED triage or even pre-hospital. Its validity has been derived and tested using a retrospective, large population analysis which you can read in the two papers referenced above. It has yet to be prospectively validated or to be validated outside of North America.

Let’s break this new set of definitions down a bit.

For more picking apart of the Sepsis 3.0 Consensus Definitions, check out these sites:

Sepsis is not an illness
Sepsis is a risk group of infected patients.

If you want to read more about the new sepsis definitions, including hearing from two of the lead authors, check out the following links: