For those of you who followed the NEJM MRSA Decontamination paper debate, there’s a news update:

The erratum has been published.

Thanks to everyone involved in this peer review process which has illustrated the power of new media in post publication peer review.

After the debate and input that followed, the update came here

The lead author of the paper, Prof Susan Huang has been engaged in this discussion throughout and has shown true scientific and academic integrity by contacting the NEJM as soon as there was a suggestion that the stats were incorrect.

Susan contacted us as soon as this was published online, and the correction notices are scheduled to appear in print in January. 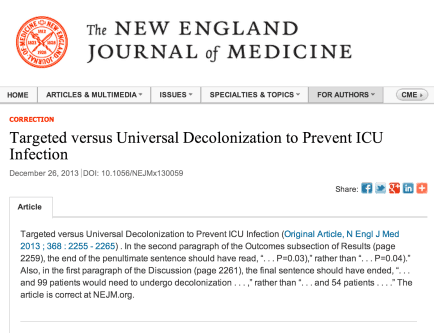